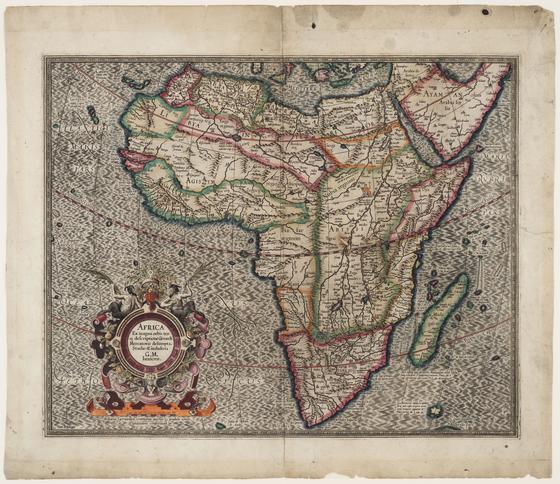 As European powers increased the exploration and exploitation of the New World, Asia, and Africa, a fervent attention to objects from so-called “savage”[1] cultures manifested itself in cabinets of curiosity. Objects of nature and artifice were abundant, such as intricately carved ivory tusks and gazelles and primates, which were popular live exhibits. The African masks on display in the Gettysburg Cabinet reflect the ambition of the Renaissance collector to possess and exhibit every bit of the world; however, the mask in African cultures serves a spiritual function. Traditional ceremonies are individual to each people and have been performed for centuries. During these rituals, which often involve some sort of dance or repetitive action, a mask is used to transform the wearer into a certain spiritual being. This enables the participant to commune with the spirits, be they ancestral or from a pantheon of gods. These practices are imperative for increasing and continuing the life force of the community and the natural resources on which it depends.[2] African masks do not follow the Western tradition of naturalism, instead conveying abstract representations of animals and spirits. The masks were crafted by skilled artists and meant for one individual wearer. For this reason no two are exactly alike.[3]

Masks and other objects from the continent were decontextualized in their transport to Europe; removed from their original environment, they became exotic décor or specimens of natural wonders for European private collections. Such items would reinforce the contemporary perception of Africa and its peoples. Ancient texts molded the educated Renaissance citizen’s vision of Africa, for example Pliny’s Natural History described it as “strange beasts and weird men living in a land of burning heat.”[4] European powers maintained such views while exploiting the commercial and cultural resources found on far-off continents. For example, in his mid-fifteenth century observations taken during the exploration of the West African coast, the Venetian merchant Alvise da Mosto described Senegambian women as ‘ready to sing and dance,’ but that ‘their dances are very different from ours.’[5] In the European mind, Africa (as well as the New World, explored almost contemporaneously) embodied the exotic; and its people, the savage.[6] An emphasis on the difference in costume, art, ritual, and skin color between Europeans and Africans resulted in this idea of savagery, despite the many similarities between some African and European societies.[7]

The tradition of curiosity about “primitive” aspects of African art and the continent itself is the source numerous contradictions. For instance, the long history of enslavement of black Africans exacerbated during fifteenth century explorations is coupled with the Western appreciation of a visual aesthetic that was one of the most important influences in 20th century Modern Art. Imperial expansion into Africa continued, and shifts of power brought more European nations to the continent.[8] Twentieth century European artists launched revolutionary art movements after having seen an influx of tribal arts in European ethnographic displays. European artists found themselves drawn to art characterized by abstraction and raw visual power, so different from naturalistic European conventions of sculpture and art.

Because the African masks used in this exhibit are 20th century productions sold to tourists, they exist as the culmination of the visual tradition of representing African art in a Western space. The smaller mask with rounded, incised red earlobes is small enough to handle easily; not the correct dimensions to function as a real ritualistic piece in ceremony, it is meant for dramatic decoration. Sharp angles form its abstract features. The mouth is open, with neatly carved front teeth, and there are thin slits for eyes under heavy incised lids. The angles of the cheeks are high-lighted with the same red, and like the other mask, the top of the head is painted red and slopes upward toward a protruding head piece. The larger piece is closer to the size of a “real” African mask, one used in ceremonies and for its traditional purpose; its length would cover the face of a wearer. However, there are no markings on the back, or any indication of a mechanism for wearing the mask, ceding the conclusion that this too is simply a tourist object, a simplification of a revered object. It is not as pointed as the other work, instead featuring elongated, pulled features and a more lifelike face carved in high relief at its top.

Amy Trevelyan, a former art history professor at Gettysburg College who specialized in Native American art, acquired these masks for the Schmucker Gallery collection because of their well- respected formal style. These 20th century masks, individual in their form and function, stand as a tactile testament to the Western curiosity with the African continent that began during Renaissance explorations and continues through the present day.