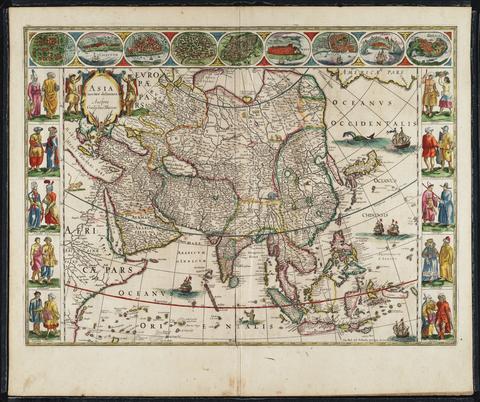 After Portuguese and Spanish explorations opened the world to other European powers, several states established colonial empires that remained powerful for centuries. The Dutch, with their widespread shipping and trading endeavors, created a corporate colonial empire through the Dutch East and West India Companies.[1] By the middle of the seventeenth century, only the English were rivals to the Dutch in controlling the seas. In the midst of this naval expansion, the Dutch espoused a tradition of cartography to guide them in their capitalistic ventures around the world. These maps were one way through which the Dutch could exert their authority and prestige, as they became marketable throughout all of Europe.[2] Many Renaissance owners of cabinets of curiosities would express knowledge of the known world by owning and collecting maps such as these. Jan Brueghel the Elder painted The Archdukes Albert and Isabella Visiting a Collector’s Cabinet (Flemish, 1621-1623) which is on display in the Walters Art Museum in Baltimore.[3] This painting illustrates both a map and a globe resting prominently on a table in the front of the room. People could view a representation of the world in maps, both literally and figuratively, and they thus mimicked the goal of numerous cabinets in serving as a microcosm of the cosmos, or a teatro mundi. For a collector, a map was essentially a “reduction that represents the ultimate in scaling down.”[4] Just as collectors sought to gain and propagate knowledge through accumulating rare and exotic animals, plants, and other objects from the far corners of the world, maps served to assert this knowledge in a cartographic form.

The Gettysburg Cabinet features three Dutch maps from the Republic’s time as a naval world power. Due to the high demand for Dutch maps throughout Europe, mapmakers such as Willem Blaeu (Dutch, 1571-1638) often included subtle features that symbolically represented Dutch power and prestige. Blaeu’s Asia noviter delineata, or general map of Asia, illustrates this symbolic Dutch clout on two levels. Blaeu depicts five Dutch ships roaming both the Indian and Pacific oceans, illustrating the widespread naval presence of their overseas Empire in the East. In addition to the five ships, there is also a depiction of the Greek god Triton in the Indian Ocean, reflecting the Renaissance drive to reinvigorate the Classical world in works of art. Triton, who is shown as a merman blowing his conch shell, is known as the messenger of the sea. In Greek mythology, he would blow his conch shell to either raise or calm the waves, creating a sound so alarming that all the surrounding giants and sea creatures would flee in terror.[5] By adding Triton to the array of Dutch ships sailing the Eastern waters, Blaeu likens the Dutch East India Company to this Greek god, warning enemy ships to beware of the ever-increasing Dutch presence in these waters. Although this version of Blaeu’s map is dated 1643-1650, it was originally issued individually in 1617. The figure on the left is from this 1617 version. The two different copies of this map promote different messages. In the original copy from 1617, the two ships, with different colored flags, are enemies and are depicted in battle. Two balls of fire are illustrated between the ships, emphasizing this conflict. In the later version (figure on the right) the two ships are flying the same color flag and the cannon fire between the ships has been eliminated. This subtle but significant alteration by the artist presents a clear message: the Dutch have created a strong naval presence in the Far East. This change fits within the greater context of the Republic’s triumphant conclusion of the Eighty Years’ War against Spain in 1648.

Alongside the message of a naval supremacy, there is also a subtler message of natural and geographic knowledge that asserts Dutch authority in the Far East. Three naturalistically illustrated animals—an elephant, a camel, and a lion—are strategically placed in areas formerly considered to be the inaccessible, far-reaching lands that “haunted human imagination,” with their races of marvelous and monstrous creatures.[6] By treating each of these three animals with naturalistic detail, even on a small scale, Blaeu shows that the Dutch have acquired an acute awareness for the natural world in exotic and distant places. This pictorial paraphernalia echoes the similar trend in collectors’ cabinets in that they both illustrate an ultimate quest for knowledge through the natural world.

Despite Blaeu’s emphasis on naturalism in his depiction of a camel, he appropriates the wrong species of camel to the central steppes location on the map. The Bactrian camel (Camelus bactrianus) is native to the central steppes region, but it has two humps. Blaeu would most likely have been more familiar with the single-humped dromedary, or Arabian camel (Camelus dromedarius), which he incorrectly associates with the steppe region.

Although a fourth animal, depicted next to a ship in the northern Pacific Ocean, appears to be a mythical creature, it is most likely a dolphin. The Dutch would not likely have had much evidence of what a dolphin actually looked like. Inland Italians during the Renaissance did not catch or sell dolphins, and the ensuing depictions were consequently far-fetched. Blaeu’s aquatic creature, perhaps continuing the Renaissance tradition, has a rigid snout, sharp teeth, and bodily curvature. Thus, it is likely contemporary observers considered this depiction to be much more naturalistic than it seems to a modern observer.[7] This map is part of Gettysburg College’s Stuckenberg Map collection. John Stuckenberg, who devoted his life to “intellectual, ethical, and religious pursuits,” was an avid collector of maps throughout his lifetime. He donated his map and atlas collection to Gettysburg College upon his death in 1903, which included three seventeenth century atlases and over 500 other maps from the sixteenth to nineteenth century.[8]

[1] Albert Hyma, A History of the Dutch in the Far East (Ann Arbor: George Wahr Publishing Co, 1953), 65[2] Benjamin Schmidt, “Inventing Exoticism: The Project of Dutch Geography and the Marketing of the World, circa 1700,” in Merchants and Marvels: Commerce, Science, and Art in Early Modern Europe, ed. Pamela H. Smith and Paula Findlen, (New York: Routledge, 2002), 362.[3] This work by Jan Brueghel the Elder is on display at the WaltersArt Museum in Baltimore, Maryland.[4] Patrick Mauriés, Cabinets of Curiosities (London: Thames & Hudson Ltd, 2002), 12.[5] Hyginus, Poetical Astronomy, 2. 23.[6] Rudolph Wittkower, “Marvels of the East: A Study in the History of Monsters,” in Journal of the Warburg and Courtauld Institutes 5 (1942): 159.[7] Lecture by Dr. Kay Etheridge, “Defining the Dolphin”, Gettysburg College, September 24, 2012.[8] John H. W. Stuckenberg, Last Will and Testament, GettysburgCollege GettDigital Collections. http://www.gettysburg.edu/library/gettdigital/maps/stuckenberg_bio.htm