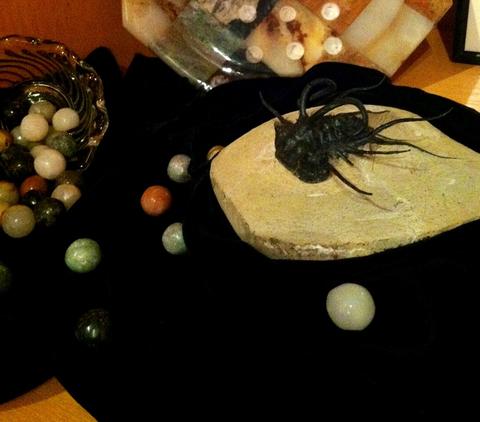 The cabinets of European aristocrats were frequently adorned with exotic animal specimens, lavish art, and intricate artifacts from foreign lands. Also tucked away in the drawers of collectors, such as Conrad Gesner, John Woodward, and Athanasius Kircher, were items of disputed identity and origin. These objects were called fossils; however, the term had a different meaning during the Renaissance. The word fossil simply meant ‘dug up,’ so any object that was excavated was considered a fossil.[1]

The interest in fossils appeared in the journals of classical scholars, such as Pliny, and these petrified specimens are also mentioned in the journals of Leonardo Da Vinci. Da Vinci did not attribute these oddly shaped rocks to divine showmanship or humor, [2] rather he thought that their peculiar placement on the earth was due to the planet going through many changes during its long history. [3] Da Vinci’s innovative hypothesis concerning fossils may not have influenced Renaissance thought though, because most of his journals were not found until much later in history. Therefore the scholars of the Renaissance were left with classical influences to help create their own hypotheses.
There was no single prevailing Renaissance theory as to what the fossils were. Some collectors, such as Athanasius Kircher (1601-1680), believed that the fossils were of inorganic origin and were symbols of the unchanging order of the earth.[4] However, he did acknowledge that fossilized fish, petrified wood, and leaf impressions had organic origins.[5] Surprisingly this did not disobey the church’s thought on the origin of fossils. The church was perfectly content with the thought that these stony remains were of animals that died during the Great Biblical Flood.[6] Others, like John Woodward (1665-1728), also believed fossils could be y the Great Flood and other forces on the mineral kingdom.[7] However, he was far more interested in the fossils ‘chemical’ properties. He would burn the fossils to see what would happen and by what he observed, he would then categorize them.[8] Still others thought the fossilized remains were bones of mythological creatures, and they were therefore placed in the cabinets next to mystical items, like the unicorn’s horn.[9]

The fossils represented in the Gettysburg Cabinet embody different Renaissance thoughts these mysterious creatures. The Dicranurus monstrous trilobite, an extinct marine arthropod[10] is a fearsome creature, with its devil-like horns and spindly protrusions.[11] This trilobite is an excellent example of a fossil that puzzled the scholars of the Renaissance because it had no analogous creature still in existence. Though some fossils perplexed the collectors, other fossils were at least partly understood. The ammonite, an extinct cephalopod mollusks[12], itself was known to be a shell-inhabiting creature; however scholars mistook its impression for the underside of a coiled snake.[13] Still other fossils, like the mako and megalodon shark teeth were less mysterious because they animals still in existence. In books by Conrad Gesner (1516-1565) and Nicolas Steno (1638-1686), one can find drawings comparing the fossil teeth to modern day sharks[14]. Although they acknowledged that the teeth resembled those of existing sharks, there was more dispute over the large fossilized teeth of the megalodon. The teeth were called tongue stones because they were thought to be petrified dragon tongues.However, Steno argued that the tongue stones were actually the teeth of a giant shark.[15]

The fossils displayed in this exhibit are being loaned by two different collectors. The Dicranurus monstrous trilobite, the Harpactocarcinus punctulatus crab and shark’s teeth belong to Dr. Kazuo Hiraizumi. Dr. Hiraizumi is a biology professor at Gettysburg who began collecting fossils as a hobby after starting at the college. The other items, such as the ammonite and the shark tooth in the matrix are from my personal collection. I began collecting fossils at the age of four due to my future aspiration to become a paleontologist.