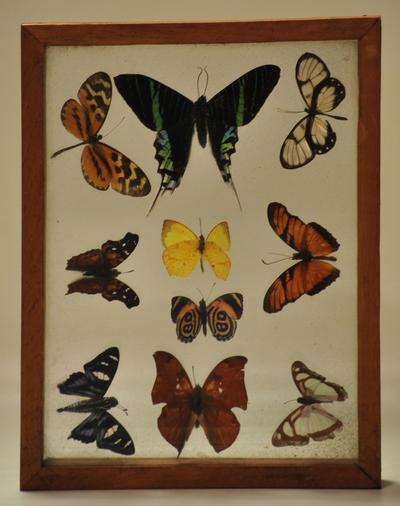 The Intricacies of Insects: Documenting and Identifying Species

The Renaissance marked a time when knowledge was valued above all things, and the collection and documentation of knowledge gave a citizen nobility and respect. The study of insects was one of many areas of study that became more prevalent in the Renaissance, and it was both reflected in and inspired by the curiosity cabinets that displayed many collections of insects.

The collection of insects was a very specialized and complicated process that required patience, perseverance, and a good eye. Because most insects are very small, early naturalists were only able to collect the adult forms of species. Equipment that was required to collect insects included durable clothing, vials to put specimens in, handy tools like knives and shovels to help dig up earth or scrape off bark, and nets. The “fly net” was the most widely used net in the Renaissance and it allowed collectors to scoop up all of the insects in a given area. Nets, however, were not useful for collecting insects that rested on surfaces, and in these cases instruments similar to tweezers were used. Sometimes naturalists used lanterns and dead carcasses to attract insects.[1]

An important man who studied insects in the Renaissance who was inspired by curiosity cabinets was Jan Swammerdam. Swammerdam’s father owned an apothecary that included a collection of rare foreign items.[2] Jan’s exposure to collections at a young age inspired him to create his own insect collection. Once he had an impressive and well-developed collection, he began to study insect morphology, anatomy, and life cycles under microscopes. In order to focus on parts of the insect he was observing, he used several different techniques to accentuate parts of the anatomy. Swammerdam injected colored liquids into the insects to highlight the vessels, put colored glass in the background, and dried out the insects to help him observe their anatomy.[3] He also dissected specific parts of the insects, like their eyes, to understand their function and the way in which those particular parts worked.[4]

Maria Sibylla Merian (German, 1647-1717) is one of the most respected natural historians and artists from the early eighteenth century. She was trained as an artist by her stepfather, but even when she was young it was clear that she enjoyed painting insects more than still-lifes. Although Merian had been collecting and observing insects for many years, it was not until she was in her early fifties that she and her daughter traveled to Surinam to study insects. Her decision to travel was influenced by several occurrences, but the most important factor was her visits to several curiosity cabinets in Amsterdam.[5] The cabinets in Amsterdam contained a wide variety of natural and man-made objects, insects included, and their owners were wealthy and powerful members of the community. The two collections that inspired Merian the most were those of Nicolaes Witsen and Agneta Block. Nicolaes Witsen had an especially large collection of Surinamese items that surely sparked Marian’s idea to travel.[6] Witsen’s various items from Surinam gave Merian an idea of where to go and an idea of who would be interested in her findings once she returned. Agneta Block’s collection mostly included insects, paintings, and a tropical garden.[7]

Merian’s studies focused on the life cycles of insects and their ecology, rather than the discovery of species. She wanted to know how they reproduced, what they ate, and how they changed throughout their lives.[8] When she returned home, she wrote and sold uncolored and colored copies of her book Metamorphosis based on her findings in Surinam. Many copies of the book were purchased by collectors who valued the observations that Merian made.[9] Both Swammerdam and Merian’s visits to the curiosity cabinets sparked their interest to study insects.

Two important natural historians who studied insects in depth as part of their overall study of natural history were Conrad Gesner and Ulysses Aldrovandi. Both men had their own museums where they kept nearly anything that they acquired. However, since neither of them focused on studying insects in particular, they needed to look at other collections to gather specific

information. Collections and stories from those who observed insects were the only ways that Gesner and Aldrovandi really studied insects. Aldrovandi was born into a wealthy, noble family, which gave him the connections he needed to visit various collections to study insects.[10] Gesner was not born into the wealthy world that Aldrovandi was a part of, so instead he used his extensive schooling and studying to get access to the curiosity cabinets. Sometimes the two of them, along with several other natural historians, communicated with each other and shared information to help each other.[11]

These particular collections of insects have been created by the Biology department at Gettysburg College and several teachers at Stonewall Jackson High School. These boxes feature butterflies, beetles, moths, and many other species. The collections range in size between 6.5 inches by 8.5 inches and 18 inches by 23 inches. The Butterfly Collection, which is 6.5 inches by 8.5 inches, is the smallest collection and has several butterflies preserved inside. Although they are not from the Renaissance, they are good examples of what the insect collections may have looked like in the curiosity cabinets.

To learn more about Maria Sibylla Merian and her work go to http://www.getty.edu/art/exhibitions/merian/