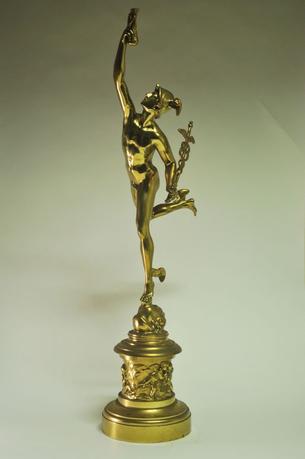 Mercury was an Ancient Roman Olympian god, who was the messenger of the Gods. He was frequently portrayed with wings on his cap and heels to signify his swiftness. The bronze Mercury statue presented in the Gettysburg Cabinet exemplifies the god’s quickness, a copy of one of the most famous statue from the Renaissance. Mercury leaps forward on his left leg while gracefully pointing upward with his right arm, creating a lifelike and elegant silhouette. The lower part of the statue’s base is decorated with images of cherubs playing flutes. The upper section of the base transforms into a head that is breathing onto Mercury’s foot. The head personifies one of the “winds”. The statue has several distinct features; in Mercury’s right hand he holds what appears to be a vial and in the left he holds his attribute, the caduceus, now a symbol of modern medicine. The statue has some tarnish that developed from improper storage before its acquisition by Gettysburg Special Collections.

This Mercury statue is a copy after a celebrated design by Giambologna, (Flemish, 1529-1608), created around 1564.4Giambologna designed this statue as part of a fountain for the Medici in the Villa Medici in Rome. The head represented below symbolized the figure being “exhaled, purified, unburdened.”

This statue was a popular one among wealthy collectors’ cabinets of the Renaissance, the Medici and Holy Roman Emperor Rudolph II, (Austria, 1552-1612). Documentation shows that the Medici gave this statue as a diplomatic gift to Emperor Maximilian II, showing its political and social importance. Emperor Rudolph II was so fond of Giambologna’s work that he attempted to persuade him to join his court. Though unsuccessful, he instead invited Giambologna’s skilled student, Adriaen de Vries and had to be satisfied with his copy of Giambologna’s Mercury statue.

Gettysburg College’s Special Collections acquired the Mercury statue from the alumni Dr. Jeremiah Zimmerman in 1933. Dr. Zimmerman was a generous alumnus who donated 75,000 books and artifacts. He valued history and believed in expanding the library to create a place for students to obtain knowledge. The cataloging of the Mercury statue appears in the Artifacts Collection in Gettysburg College’s Special Collections.

This Mercury Statue to the left [image no longer available, follow link] is valued at $459.00 but on sale for $199.00. It weighs 12 lb. and was created with the hot wax method. This Mercury Statue is a replica of the Giambologna statue created by a method that allows this statue to be a closer replica to Giambologna’s original then the one featured in the Gettysburg Cabinet.

This model was created differently then our model in the Gettysburg Cabinet since it was made with the hot wax method. The hot wax method creates the statue by first creating a mold of the artist’s original. The next step involves putting fireproof clay into the mold and producing a second model identical to the original. The original mold was taken and a layer of the mold was scraped away creating a thin gap between the model and the mold. This gap was created to pour wax onto the model creating a replication of the original statue. This process allows a wax mold to be created to look exactly like the artist’s original. This mold then had a network of pipes attached to the model which when filled will replace the melted wax with metal. The mold had liquid bronze poured into the gaps left by the melted wax creating the replication of the artist’s original statue. Once the liquid bronze cools the mold is broken and the systems of pipes are removed leaving the bronze statue. The last of the fireproof clay was from the model and what was left standing was a statue designed almost exactly like Giambologna’s.

These Mercury statues were created out of different materials then Giambologna’s original. Giambologna enjoyed using bronze to create his statues. He was one of the earlier artist who used bronze to create sculptures out of. The Gettysburg Mercury is believed to be created from gilded gold. Gilded gold is when the artist covers their statue in a thin layer of gold to create the gold appearance. There is a possibility that the Gettysburg Mercury was created from brass but as of now we do not know.

This museum replica [image no longer available] of the Mercury is currently being sold on ebay for $1,599.00 US dollars. The Mercury was created out of fiberstone and stained with antique stone finish. The statue can be a decoration for inside or outside of the house.

It is really wonderful to see that art styles from the Renaissance are still valued in today’s society. These Mercury statues are replicas similar to Giambologna the artist who made the original statue so popular. They are popular as adornments and valued for the Mercury figure, as the Roman God, or as the admired statue created by the famous artist Giambologna.