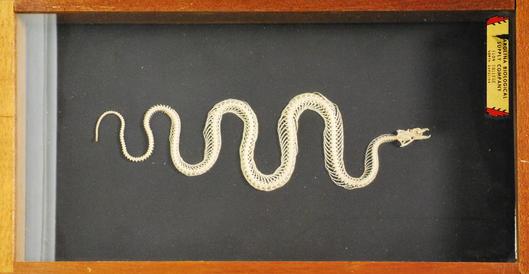 The reptile specimen in the Gettysburg Cabinet is a snake in skeletal form that appears to be slithering with its mouth open, as if it were about to bite someone. The snake is fairly small, 8.5 in x 3 in and has a diameter of no wider than 1 in (Figure 1). The snake is wider at the head and its body tapers down to a very thin point at the end of the tail. Its skeleton is white and although it has been skinned and cleaned it contains the essence of a live snake. This specimen was used as a teaching implement for Biology courses. The Gettysburg cabinet also contains a stuffed snake, a lizard skeleton, a stuffed crocodile, and a turtle with it’s nervous system suspended in liquid.

Certain reptiles meant different things to visitors of collection cabinets. Snakes were included because they were known to be venomous and this was a reminder of the mortality of humanity, something the cabinets often included in their many themes.[1] Interestingly, the cathedral of Seville suspended a crocodile from the ceiling as a symbol of evil; this may indicate one reason for the inclusion of crocodiles and serpents, and why many of them were hung on the ceiling of cabinets.[2] These early ideals could have come from the Bible and the reference to the devil as a serpent, serving as a momento mori and the triumph of man over evil. Snakes were feared because of this evil undertone and their ability to cause death and pain. The inclusion of snakes in the cabinets was also for awe-inspiring reasons. Sea turtle shells were often included due to their enormous size. They were wondrous to the Renaissance people who had never seen such a thing before.[3] The cabinets were a form of knowledge and the specimens would have also been used as teaching implements, hence why many naturalia objects were found in the scholarly cabinets.

Apothecaries, early pharmacists, collected the largest number of naturalia specimens. Their cabinets contained more reptiles than the princely cabinets like those of Emperor Rudolf II and the Medici, but reptiles could also be found in scholarly cabinets and collections of private citizens. The apothecary Ferrante Imperato had a cabinet in 1599 that contained a large crocodile hanging from the ceiling. In 1610, the physic Garden of Leiden University possessed rattlesnakes, crocodiles, and a large turtle shell. Ole Worm’s scholarly cabinet of 1655 included two large turtle shells, a crocodile, and multiple lizards, and Basilius Besler, classified by himself as a pharmacist, chemist, and cultivated admirer of botany, had a collection in 1622 that included a crocodile, lizards, snakes, and a turtle.[4] The Library of Sainte-Genevieve in Paris in 1692 contained a marine turtle shell and a crocodile in the quadruped section.[5]

The encyclopedias of natural history displayed some of the beliefs Europeans held regarding reptiles during the Renaissance. In Edward Topsell’s natural history on serpents, it was stated that serpents were created by god and ruled by men, and that the devil had entered into the serpent. Europeans during Renaissance believed serpents could devour men, women, children, oxen, sheep, goats, and more.[6] The inclusion of serpents in the cabinets showed a triumph of man over evil. Interestingly, it was believed that a burned and boiled serpent could help with a toothache and the fat of a snake combined with verdegrease could help to heal a rupture in the eye. Another reptilian subject in Topsell’s encyclopedia was the crocodile. Crocodiles were said to love their females and display jealousy. Topsell also mentioned that if a man winks at a crocodile with his left eye and stares at it with his right eye, the crocodile would run away. Topsell also included information on tortoises in his natural history on serpents. He included information on their mating, habitat, and general appearance. Topsell described tortoises as being crafty, subtle, and happy. Tortoises were believed to be good for gardens and harp-making. Modern natural history books do not include the myths of Topsell’s book. They typically only include the organism’s origin, life cycle, form and function, role, and the different species are given and described. There are however, modern publications (not natural histories) similar to the Renaissance natural history books that contain myths, appreciations, and other information that would have been included in the natural histories.[7]

The snake specimen obtained for the Gettysburg Cabinet has been in the Biology Department’s possession for decades. It originated from the Carolina Biological Supply Company in North Carolina. The snake was used as a teaching implement; something the students could see and feel, not unlike how specimens were used in the Renaissance cabinets. The other reptilian specimens in the cabinet had been used in Gettysburg College’s own Animal Physiology courses as implements for teaching. They were a way for the students to see and study the animals in real life as opposed to an image or through text. [8]

Check out these awesome links for more information on reptiles and the Renaissance cabinets!